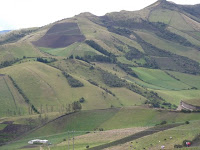 after breakfast, Sue and our family rented a car and headed south. Our destination was a region about two hours south of Quito, a high Andean rural area, punctuated by small towns and communities. The main road around this region is dubbed "the Quilatoa Loop" in the guide books. Quilatoa is the name of a lake in a volcanic crater with a circumference of, perhaps, 6-8 miles. 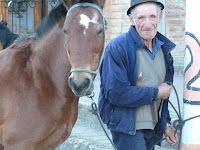 We entered the loop from the north east corner, heading counter-clockwise. The area is sparsely populated, and there is very little traffic as well. Driving to Isinliví we saw lots of sheep, a few llamas and lots of fields on steep slopes being cultivated by hand by entire families. Potatoes, wheat and onions are some of the main crops in this region.

The town of Isinliví is quite small, 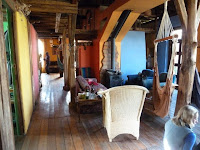 and we stayed in a wonderful little hostal called Llullu Llama. There were seven other travelers there, including a garulous Australian couple in their 50s, who had met doing an extended world tour 30 years ago, and were now back on the road after raising their family. We all ate family style.

Since the main road between Isinliví 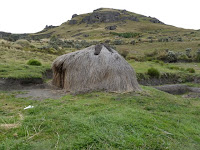 and the lake was reported to be a bumpy dirt road, so we decided to take a different, more direct, bumpy dirt road. Along this route we saw something we hadn't seen in Ecuador before: severe rural poverty. In many of these communities the majority of homes are "chozas" 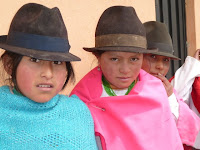 or low huts made with grass roofs reaching to the ground. (Although I interpreted this as one of the signs of their poverty, grass roofed huts being on the low end of the building material hierarchy, below adobe and concrete block, a guide we met at the Inti Solar museum a few days later, asserted that it was tradition, not poverty which lead to this choice of living arrangement.) At a couple places where we stopped and asked directions, we were asked for money. Outside of the occasional drunk, or some very down and out beggers, this hadn't happened to us before. But the people here asking for money weren't down and out, they 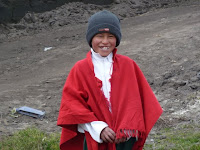 looked young and/or healthy, they were friendly and helpful, and once they asked not for themselves, but rather for help with a new school building, but they didn't have any qualms about asking. Perhaps other travelers willingly gave when asked, and this is where the custom/problem started. Anyway, it was a little odd. Outside of this, and even considering this, the people we met, especially in Isinliví (where they didn't beg) are extremely friendly. Big smiles greet us, and people are happy to talk.

Although we somehow got off the road we were supposed to be on, 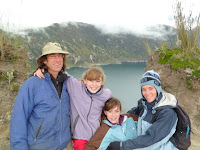 we eventually got to a paved road on the south side of the loop. And once on this road, it was an easy drive to the lake. Supposedly it takes about 5-6 hours to hike all the way around the lake, along the rim of the crater. We only hiked out for an hour or so, and returned the way we came. The lake is beautiful, and although clouds obscured the views to the Cotopaxi and Ilinizas volcanoes to the north, the panorama views 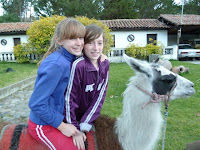 of the patchwork crop lands were wonderful.

We spent the night in a old hacienda house a few miles east of Tigua, about 45 minutes east of the lake. The delightful owners treated us and the other four guests with canelazo, stories of the history of the hacienda and a lovely dinner.
Posted by d at 5:25 PM