I haven't written lately because I've been spending much too much of the past week playing network administrator (a job for which I am completely unqualified) for our apartment's wireless network. Additionally, we haven't really had too many experiences worth blogging about - lots of mundane stuff. But here is a little bit of what we've been doing

Juan Luis Guerra concert. Pretty much since we arrived in Cuenca we've been seeing posters for a concert at the soccer stadium with Juan Luis Guerra. He is a very popular Dominican singer, mostly of merengue and bachata styles, and has a great band composed of lots of rhythm and horns. It was an interesting scene - really an all-ages crowd, lots of older people, probably about 7,000 in total. We sat in the covered seat area, instead of on the stadium floor, at the suggestion of some friends we went with. The sound wasn't that great, and we were pretty far back, but it was a fun concert. Everybody moves! There was a little Michael Jackson tribute in the middle, with a Latin-syle "Thriller-esque" piece, with four dancers wearing one white glove, but mostly it was straight up Latin music. We ran into our friend Gladys, a cousin of Jaime, who snuck into the concert towards the end (she is about 55) with a bottle of coke and Zhumir (the local aquardiente). After the show, she invited us over to her penthouse condo (!), and while we were looking for her car she ran into some other friends, whom she also invited over, and so we had an after concert merienda until about 1:00 am. 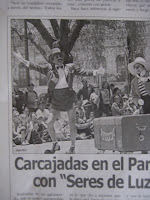 Fame. Debby has been spending her time getting in the local paper. First there was the Argentinian clown show that we went to in Parque Calderon (the central plaza in the heart of the historic old town). The next day, there was a picture of the performance in El Mercurio (one of the local papers), and if you look closely at the bottom left, you can see Debby and Mia sitting and watching.

On Friday of the same week, we were back in the park, to watch some folkloric dances, 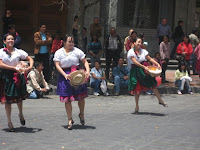 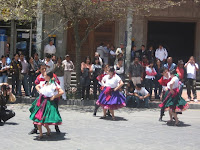 as part of Int'l Tourism Day. After the colorfully dressed dancers finished their performances, they grabbed a few people from the front row, and brought them out to dance. I got a picture, 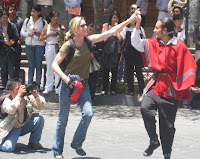 as did a photographer from the paper

Politics. We're still learning about politics here, but there has been a lot going on. I think that, as part of a recently approved constitution, the National Assembly is working on approving a series of fundamental laws governing many aspects of how the country should run. One of these concerns education, and the proposed law has the extremely powerful national teachers union, UNE, up in arms. They declared a strike last week, and although it is not very widely supported - most of the schools in Cuenca are operating normally, there are some sporadic protests. Occasionally the street in front of the University of Cuenca (not the one Debby teaches at) is closed, and rock throwing students "confront" the police. It's mostly pretty low-key, and we tend to stay far from it. Another important law being discussed concerns water, and the campesino union is opposed to it, saying that it privatizes water rights. The government denies this, but the campesinos are planning a blockage of major roads around the country, starting this morning, so we have postponed a planned trip to Cajas, a national park about one hour from Cuenca. This all seems a little odd to me, considering that Correa came to power as part of a "Citizen's Revolution." As I said, we're still trying to figure it out.

Job. Still nothing new on that front for Don. I've given up on waiting for the contact that Pichi was going to help me with, and I've emailed some local council members my resume, and what I'd like to do. I also brought a hard copy to their offices, and I was going to go to the office of the Mayor's aide that Pichi was going to set me up with, but the student protesters were protesting in front if his office, so I decided to wait. A gringo friend we've met a few days ago knows the Director of Mobility and Transportation, and he has tentatively set up a meeting for us on Tuesday, so maybe something will happen.
Posted by d at 8:01 PM