Debby here. This seems to be a good motto to go by this year. If we expect the unexpected, we will not be disappointed and there will always be that sense of adventure. What will happen to me today? 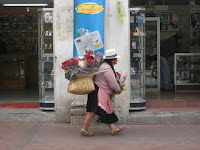 Although we thought we had done our homework fairly thoroughly about life in Cuenca, there have been many surprises, some good, some not so good. First, the good. Who would have ever guessed that we could drink the water directly from the tap and not get violently ill? We had told the kids many times that they would be brushing their teeth with a water bottle and could never, ever drink from the tap. Turns out the water in Cuenca is not only the cleanest in all of Ecuador, but also in all of Latin America! The main water source comes from Cajas National Park (30 km west of Cuenca at 12,000 feet) and the many lakes and snow melt from there. We still do carry around our trusty REI steri pen when we are traveling around since the water is not safe outside of Cuenca. We get some interesting looks at restautants when I stick this phallic symbol into the water bottle and wait for 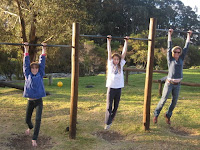 90 seconds for the smiley face to appear! :) Greatest invention for travelers and campers!

Another surprise was the size and modernity of Cuenca. I was here 20 years ago and remember it as a small colonial city. Ecuador's economy has grown a lot in the last two decades, primarily due to petroleum exports, tourism, and all the remesas (money sent from Ecuadorians living in the US). Turns out the province of Azuay (southern Ecuador) has the highest rate of people emigrating to the US in the entire country. We have been surprised to be out in the country side and see huge McMansions, along side a humble campesino's shack with an outhouse and a small plot of land. THe locals call these homes "residentes" and they are built entirely from $ sent from the states. The weird thing is that, despite being huge homes, they often have nothing in them except for a TV and a chair and a cow outside. Around these towns, you see kids with fancy American labels sauntering the streets. As in Mexico and in so many other Central American towns, these communities are missing most of the men from ages 18 to 50. The devastating effect on the family structure and the traditional communities and lifestyle is palpable. The majority of the Ecuadorians go to NY, Chicago, and Minneapolis. I haven't figured out the midwest draw yet.

We knew it was going to be chilly in Cuenca, but I, for one, did not expect such cloudy skies! Don, the eternal optimist and realist, always says "the weather just is, get over it". We have been here for 3 weeks but have only had about 4 totally sunny days. I think I notice the weather more when I'm not working... What we have learned is to dress in layers. In any given day, it can be overcast and raining and then 10 minutes later the sun comes out and it's 75. The sun is incredibly strong here (Ecuador- mas cerca del cielo..a popular marketing slogan for tourism) and we can get fried in 10 minutes if 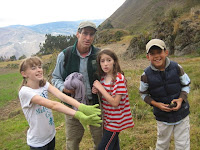 we don't put on sun screen. Now that it is September, though, it is warming up. Turns out August is the coldest, windiest month so we are now moving into the eternal spring we kept hearing about.

Don already mentioned the traffic. We have been surprised to see so many single drivers. Turns out Cuenca has far more cars than inhabitants. Gas is subsidized here (about $1.40 a gallon) so most middle class people drive everywhere. We were really discouraged at how loud the historical center was (especially since we were planning on living in the heart of it) and how the traffic was constant. Thankfully, we found a great apartment on a really quiet street, close to the biggest park in the city. The residents and the government are well aware of the traffic problem and yesterday, September 22nd was Cuenca's first ever "Day without cars". The idea was to encourage people to bike, bus, or walk to work. Don and I didn't notice a difference, but, according to the mayor and today's paper traffic was down 30%. It's encouraging to see that some people are beginning to be more conscious of the environment, although it's a far cry from where we are in Seattle.

One more surprise was, after about 10 days of being in school, we realized that both Mia and Nikki were in the wrong grades. I kind of clued in when my neighbor's 8 year old said she was in 5th grade. Nikki is 10 and in the States she'd be in 5th grade; Mia is 12 and would be in 7th. Turns out that after Kindergarten they go right to "segundo basica", or second grade. "Colegio", or high school, begins in 8th grade so Mia is in high school here! We had to get her a different uniform and return all their books and buy new ones. It was a hassle, but they are definitely in the right grade now with peers their age and they are learning material that is appropriately challenging for them. 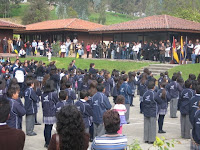 I'm sure there will be many more good and bad surprises to come, but we are open to everything...
Posted by d at 1:57 PM