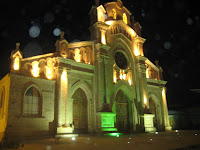 after school with the girls, heading for Saraguro, three and a half hours to the south. We spent the night there, and Tuesday morning, we continued south, an hour and a half to Loja, and then, without leaving the bus station, we finished with another hour and a half southern journey to the town of Vilcabamba.

We had been hearing about 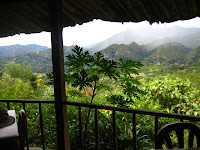 Vilcabamba practically ever since we arrived in Cuenca, as a beautiful town in the southern Andes, near a national park (Podocarpus), and with opportunities to hike and horseback ride, as well as treat ourselves to a bit of luxury. Tuesday and Wednesday night, we 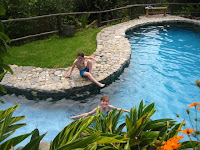 stayed at the Hostel Izhcayluma, a semi-luxurious place we had heard about with backpacker prices. And it lived up to expectations: friendly staff, beautiful gardens and views, nice swimming pool and game room, and great German food. They have also put together a nice series of maps with descriptions of hikes around the area.

Tuesday afternoon, in the restaurant, we met Todd, Peg and Nico (10), a family from Taos, on a sabbatical year like us. They had been doing volunteer work in Baños for a couple of months, and when we met them, they were on their way south to Peru for about a month of traveling. Afterward, they would be 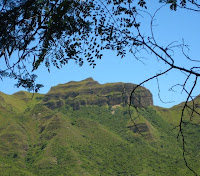 heading back to a small village outside of Salinas, where they would be volunteering for another couple of months (and possibly more) on a community development project. They are a really nice, inspirational couple. After only 10 minutes of chatting, Debby and Todd discovered they knew 2 people in common from Lakeside and Albuquerque Academy...what a small world! They run a charter middle school in Taos that has a focus on outdoor education, and so they were the perfect hiking companions on Wednesday, when we all took on the "Mandango" loop.

The hike climbs over 400 meters (about 1,200 ft) along some pretty steep and sometimes narrow trails. After it reaches the top it continues on a razor's edge ridge line, before dropping back down into forest and finally back to the road. Peg, the quintessential cheerleader, did an amazing job of keeping Nikki moving forward along the trail, not accepting any whining or attempts to turn back or park herself in the middle of the trail. The hike and views were amazing, and Nikki did seem to feel proud of herself afterward. When we got down to the road, Debby and she 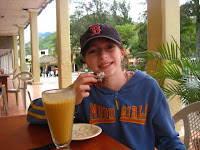 walked into town, and when Debby offered her some cookies, she said no, but walked up to a campesino walking along the road, and offered it to him in Spanish. While we've seen this kind of big-hearted generosity from her before, it is out of character for her to approach a stranger like that, and for her to speak Spanish to anyone when one of us is around. Although she wouldn't verbalize it directly, she was clearly proud of her accomplishment and feeling confident and good about herself.

Thursday afternoon we left Izhcayluma and headed into town, for lunch, before heading out again, this time to the east, to the Cabañas Rio Yambala. The town, especially the center, was a bit weird in that it was full, I mean FULL, of North Americans who live there. It felt like a neutron bomb went off and removed all the locals, but left the architecture undamaged, and gringos had moved in to take their place. Lots of real estate offices, American-style restaurants, overpriced jewelry and other artsy stuff, and English everywhere.

The Cabañas Rio Yambala are a different story altogether. Charlie, the owner, has lived in Vilcabamba since 1978! He is married to a Brit, and they have 2 kids, 16 and 18, who grew up there, and they are all completely bilingual. Right now he has about 4 cabins, but he used to have more. I imagine that although he had one of the first hotels in the area, it seems that as Vilcabamba has gone from barely-on-the-map backwater to noveau-Santa Barbara, Cabañas Rio Yambala isn't getting anywhere near the customers they used to. His place is more for hikers and outdoor adventurers - in fact at some point he purchased a bunch of land bordering Podocarpus Nat. Park, and set it aside as a refuge. He runs horse trips into the refuge, which we participated in on Friday.

We left after breakfast, Nikki on 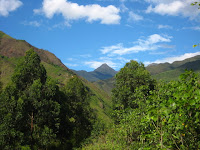 Whiskey, Mia on Rum, Debby on Niño and Don on Speedy Gonzalez. The ride up was long, but passed thru some beautiful country, with views up and down the valley, from the Solomaco peak to the town down below. It took about 3 hours to get to the refuge, which is probably about 2 hours and 50 minutes more than I've spent on a horse in my entire life! The horses seemed to know the way, following the trail, although it was sometimes quite overgrown, including two stream crossings, and breaking into a gallop when the terrain permitted. (One such gallop event caught Debby off-guard, and while her life didn't quite flash before her eyes, some other bodily functions reacted with a near-death response. Which explains why the horse dropped to the ground and rolled on its back when it finally stopped.)

At lunch, Jorge, our local guide, gave us a bit of the local 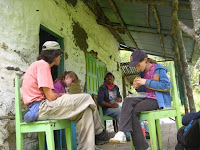 perspective of the Gringoization of Vilcabamba. He said that there really isn't much for locals in town anymore. Most of the restaurants in the center serve American-style food, which the locals don't like, and is way too expensive anyway. He said that outside the center, where anyone used to be able to freely walk across the neighbor's property, now there are fences and "private property" signs, and if one pauses too long (to look at the latest super-sized McMansion or Romanesque villa) the people inside look at you with suspicion, and "Que haces?" ("what are your doing?") He also told us the story of a robbery and vandalism that took place at the house of a developer in the countryside a few months ago. No one knows who did it, but afterwards some flyers appeared with the message that native Vilcabambans needn't fear, they just don´t want any more big-money Gringos moving in. Of course, there are some economic benefits to the gringo invasion: construction jobs, and gardener and domestic help jobs and tourism jobs, but land is priced way out of reach of the locals, and the balance is missing.

After lunch, we hiked up from the refuge to a zip line in the trees. It should have been a 40 minute hike, but Nikki was whining and dragging the whole way ("My leg hurts," "It's too steep," "You lied about how long it would take," blah, blah, blah....) I had hoped that her successful hike just two days earlier would have helped her turn over a new leaf, that perhaps she'd realize she doesn't have to play the role of "the daughter who doesn't like to hike," but apparently she's not ready to give this up just yet. And it's not like she is physically unable. With about five minutes of hiking left before we arrived at our destination, she gave up, and after much discussion, we agreed that she would stay where she was on the trail, while I went on. Well, who do you think showed up not more than 2 minutes after I did? 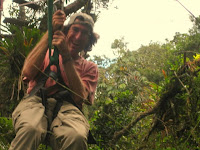 Anyway, she cheered up pretty quickly after she watched Mia do the zip line, and she had a couple of runs herself, and they were both laughing and giggling on the horse ride home. (The hike, by the way, was relatively hard, but not as hard and much shorter than the one we did two days earlier. I also need to mention that I hiked briefly with Mia on the way out, and she did a great job - steady, confident - she's turning into quite the hiker!)

Saturday morning, after a leisurely breakfast and a long chat with Charlie, we left Vilcabamba for Loja. We decided to break up the trip 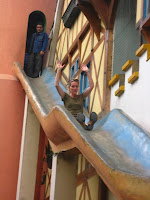 home with an overnight in Loja, a medium-sized city that we have wanted to explore for a while. We got in around 2:00, found a hotel, had lunch and headed out to Parque Jipara, a large park with lots of very cool features, including a three-story "Eurolatin castle" with a slide from the second story, a Chinese pagoda, a replica of St Mark's Basilica on Red Square, a small zoo (ok, just a couple of ostriches), a paddle boat lagoon and a half'pipe for skateboarders and BMX bikers. Although 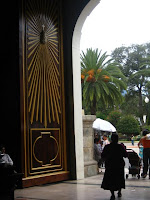 we didn't spend a lot of time in Loja, it seems like a nice place. It has a reputation for being a cultured city, with a well-respected university, and a tradition of art and music. It is a little smaller than Cuenca, and (although we were only there on Sat. afternoon and Sun. morning), the drivers seem less aggressive (i.e., less honking, more likely to let pedestrians cross the street), and we heard far fewer car alarms. Also, interestingly enough, the entire town did not shut down on Sat. afternoon, like it does in Cuenca. At one point, early on, we had considered spending our year here (although admittedly, before we knew anything about it), and although we are happy with our choice, I don't think we would have regretted Loja either.
Posted by d at 6:25 PM