In January I (Debby) started volunteering at a center called 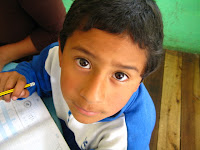 Fundación Arenal. Located a couple of blocks from Cuenca's biggest market, la Feria Libre, Fundación Arenal serves as a day center for kids whose parents work all day at the market. If it weren't for this Center, many of these kids would be at the market after school at best and, more likely, hanging out on the streets. The market is located in a pretty tough area of the city and the poverty surrounding the neighborhood brings me right back to Tegucigalpa, Honduras.

As a private school parent 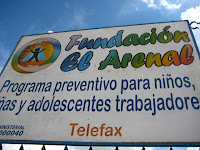 and a University professor here, I have mostly been surrounded by middle to upper class Cuencanos. This volunteer job puts me in direct contact with the city's neediest and most vulnerable population. I work with the 6 and 7 year olds in the afternoons. The kids are in school in the morning and then they eat lunch at a special place in the market (funded by the Foundation) and then they head over to the day center. We start our afternoon with some quick exercises and calisthenics (yesterday we danced to MJ's "I'm Bad" - very cute!) and then the kids go into their age appropriate classroom and sit down and do their homework. Homework is a big deal in Ecuador, at all levels, and if the kids do poorly on it it's a reflection of their parents. I've seen so many shopkeepers, neighbors, domestic workers, etc help their kids (read: do their homework for them) with their work after school. Kids definitely don't do it on their own, except in our household. Actually, Don and I both end up helping Mia and Nikki a lot with their daiily work mostly when they get stuck in the language.

Anyway, the 1st and 2nd graders at Arenal come from very poor, unstable, and often abusive homes. Their parents, if they have both living with them, have no time or desire to sit down and help their kids with their school work. Many of the parents didn't study beyond 6th grade. Many of these kids are behind their peers in reading and writing and the Center is trying to close that gap, while raising the self esteem of the kids. 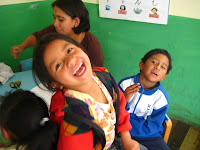 The first day I was there I immediately noticed that this population was different. Their clothes are dirty, they smell like they may not have bathed in several weeks, and they are constantly itching their hair (lice....). Their language is different from other kids, they are more physical, and they are starving for attention. Within 10 minutes of being there on the first day, I had little girls climbing on my lap, touching my hair, looking at my wedding ring, staring at the color of my skin, and asking me questions non stop.

After several weeks of going, I started to bring some picture books in Spanish to read to the kids. After they finish their school work, they get a stamp and they have free time. One day, I pulled out an "I Spy" book in Spanish and I instantly had a crowd of kids surrounding me. They were completely rapt by my story telling and I realized many of them have probably never ever been read to at home or at school. They were amazed by the pictures, loved following a story, and begged me to bring more books! One little boy sat on my lap the entire time and was totally focused on the story and the lead educator for the classroom told me after she had never seen that boy sit still for more than 2 minutes. I'm going to try to build a little library at the Center and am working on getting some books at a discount from a local bilingual book store. Kids' books are really expensive here. 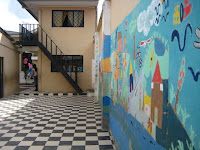 Yesterday I had an eye opening conversation with a 7 year old. When I first met her, I could tell she was a very angry kid and she spent more time sticking her tongue out at me and making faces than anything else. I decided she would be my personal challenge. For the first 4 or 5 visits, she continued to be nasty to me and even hit me on the arm, calling me stupid. She swears all the time to the other kids, pulls their hair, rips their paper and then gets in trouble. Apparently, it's even worse in school. My initial reaction was "I don't need this" and I moved away from her, but then later I realized she's just testing me and this is the only way she knows to get attention.

Yesterday we made a bit of a break through. She was relatively polite to me and now understands she can't use foul language or hit me. She asked me if I was married and when I told her I was, her first question was "Does he hit you?" I was shocked and told her no, when we have arguments, we work it out with words. Her follow up question was "He doesn't even hit you when you are with other men?" !! Then I asked her if her Dad hits her Mom and she said "all the time, especially when she's with another man". Her next question was shockingly vulgar, especially for a 7 year old. ¿Su esposo la sube en la cama? (Does your husband mount you?? !!!) Again, I just told her we hug each other and then go to sleep in bed. And she told me her family of 7 shares a room but she is in a different bed than her parents. Children are indeed products of their environments....

I'm sure there will be more eye opening stories as I get to know these kids. The Director of the Center tells me these are the most vulnerable kids. In addition to being extremely poor, many of them come from homes of domestic violence, alcholism, drug addiction, and there are even cases of incest. The Center has several social workers who work with the families as well, but it is an uphill battle. The satisfying part for me of working with kids is there is always a seed of hope in youth and I can only hope that the positive role models they see around the Center can give them a glimpse of other possibilities for their futures.
Posted by d at 2:19 PM