Nov. 3rd is Cuenca's independence day (all the major cities seem to have their own independence day), and since Nov 2nd was Día de los Difuntos, and Nov 1 Día de Todos los Santos, it was a long weekend. We were going to stay in town to see all the festivities; parades, fireworks, beauty contests, etc., but we decided instead to take advantage of two days off school to go on a road trip. We rented a car (!) and headed north to Baños (de Ambato). We were a bit apprehensive about renting a car, as many of the roads are in bad shape, and the drivers are crazy, but we decided that the extra mobility a car affords was worth it, and if we stayed off the roads at night, we'd probaby be ok.

We left Cuenca about 3:30 in our rental Chevy Corsa - a small, weak car, which meant that we wouldn't be racing other drivers around blind curves or up steep hills, and after a short, unplanned detour to find 1) a gas station and 2) the northbound lanes of the highway out of town, we were really on our way.

While many of the roads in the country are in bad shape, this is changing, and there is a lot of road work going on. On the Panamerican highway heading north, this means that they are replacing the pot-holed asphalt with reinforced concrete, definitely an improvement. But since the road is a 2 lane highway, this means that there are quite a few spots where one lane is closed at a time. L

ocals take advantage of this situation, and itinerant snack sellers work the waiting line of cars, offering nuts, chips, drinks and cut fruit. Due to the delays, and the patches where the road still needs considerable work (asphalt gives way unexpectedly, and unannounced, to dirt), we didn't get quite as far the first day as planned. Instead of spending the night in Alausí, we felt ourselves lucky to find a place to stay in Chunchi.

After checking into a clean but non-descript room in probably the only hotel in Chunchi, atop a 24 hour restaurant right on the Pan-am highway, we found a place to eat. Talking with the waitress, we learned that there was a festival that night, a "concurso de baile," a dance concert to raise funds for the old folks home. We headed down to the "Coliseo" to check it out (without our camera, unfortunately.) The coliseo was sort of like a high school gym, with concrete bleachers, about 1,500 people in attendance and two (2) doors (can anyone say "fire code?") We were the only outsiders there and we could feel all the eyes on us. Nobody goes to Chunchi, which made our time there all the more unique. The dance groups came from surrounding villages, and typically had about 25 - 30 participants, ranging in age from 8 to 30, men and women. The dances were all sort of the same, a line of men and a line of women converged, mingled, separated, etc., but the costumes were great. Men wore western style cowboy hats, serapes, and leggings made of some furry animal hide. Women typically wore large, colorful skirts, shawls and headscarves. In some of the dances, one person stood apart from the lines of men and women. This person was dressed almost other-worldly, with a facemask and headress. They weren´t leading the dance, as much as overseeing it, only occasionally whipping a dancer back into the line. We got back on the road the next morning 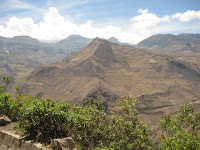 after breakfast, with Baños as our destination. The Andean countryside is stark and beautiful. The road winds throug very high hills, mostly cultivated, or waiting to be planted. Very little forest is seen here, and the hills are rolling, not rocky like the Cascades, even though the elevations are between 7,000 and 10,000 ft. As we were getting close to Riobamba (our intended lunch s top) we saw what looked like a small rest stop, with a large group of colorfully dressed people visible from the road. We pulled into "Laguna Colta" where the tourism a 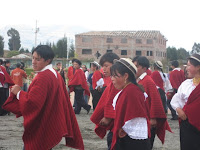 gency was having a group of folkloric dancers perform for visitors. We checked it out, explored the lake and the playground, and headed on. After a nice lunch in Riobamba, we headed on, arriving in Baños about 4:30.

I wasn't sure what to expect of Baños, but it is definitely a touristy place, although 95% of the tourists are Ecuadorian. There are lots of hotels, restaurants, and "tipica" stores, all crowded into a fairly small valley, surrounded by beautiful hills, and just out of view, the active volcano, Tungurahua, whose last major eruption was about 10 years ago. Due to the long weekend, the place was packed, mostly with "Quiteños." Along with some great restaurants, and some good, cheap hotels, there are also a number of outfits offering various adventures: mountain biking, 4-wheeling, bridge jumping, and tours in open-sided buses offering tours down the valley to one of many "tarabitas" or cable cars crossing the Rio Pastaza. 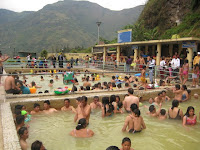 The next morning, before breakfast, we went to to one of 3 municipal baths, which are set up to take advantage of the thermal mineral water coming from the volcano. We thought we would beat the crowd, but since they open at 4:30 am, the pool was already packed when we got there at 7:30 a.m.. (I think that one of the reason's they are so popular is that it is awfully hard to get anything like a hot bath in Ecuador. Most homes do not have bathtubs, and most showers are equipped with an on-demand water heater, located right at the shower head. The heat turns on with the water pressure, but it's capacity is easily overwhelmed by the flow of cold water.) After breakfast, we hopped in our car and drove down the valley to
"El Pailón del Diablo," (Devil's Cauldron),
an enormous and powerful waterfall. Beautiful, but nothing in the way of solitude - the 30 minute hike to the falls had more people than the path around Greenlake on a sunny day in February! On the way back to town, we decided to stop at a tarabita, and take the
cable car across the river. 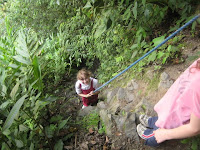 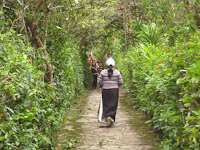 Luckily, the tarabita we chose allowed us to get off on the other side which we did, and went for a very nice hike on a stone-lined path thru jungle-like terrain to a smaller waterfall. There was also a little restaurant, which had a small tank full of trout, which they would cook up for you if you'd like, and

some very cool rope swings out over a river. 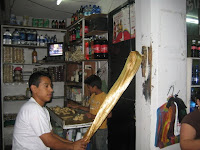 Back in Baños at night, we checked out some local "delicacies" of sugar cane, cane juice, and a hand-pulled taffy called "milcocha."
Mia, Debby and I awoke early on Monday morning and took a steam bath like we've never had before(baño de cajón). You sit down on a bench and an attendant closes you in with a box so that only your head is exposed. There's a lever you can adjust to let in more or less steam and for 5 minutes your body heats up. The attendant then opens the box, and leads you thru rinsing your body parts off with cold water. We repeated this procedure 5 times and the attendant finshed us off with a cold water jet spray. We all felt relaxed and refreshed for breakfast after that! After breakfast, we hiked up to a small viewpoint above the city, then to the town cementary. While people do clean up and decorate their relatives graves for Day of the Dead, the day is not celebrated like it is in Mexico. (Most of the cementeries we've seen in Ecuador have the graves above ground - I'm not sure why that is.) We left town around noon, hoping to get about half-way back to Cuenca, but the long line of cars returning to Quito, and the numerous detours for road construction meant that we only made it as far as Riobamba. We scored a really cool hotel in Riobamaba- a family's restored 100 year old home and we had the place entirely to ourselves which was fun for everyone. We ordered take out and spread out in this beautiful mansion (the owner slept upstairs in a separate area). In the morning, we awoke to clear skies and a view of the spectacular Chimborazo volcano, the highest in Ecuador (20,700 feet). A beautiful and uneventful drive on Tuesday brought us back home, where everyone was happy to be.

This past week in Cuenca has been a bit strange, in that the rainy season has not yet started in the southern part of the country, and the rivers are very low. This means that the hydro-electric plants are running at way below capacity, and Thursday and Friday the government started rolling blackouts in various sectors of the country. Making things worse, there have been a number of forest fires in the hills surrounding Cuenca, possibly started by campesinos who believe that the smoke from the fires will bring the rain. (This is actually what people are saying, although it sounds a bit like scapegoating to me.) Anyway, we are all hoping for rain. (Well, maybe not Debby - she does like the sun.)
Posted by d at 7:15 PM